A downloadable game for Windows

A whole game on one screen:
- Land off with your space ship
- Cross the space and avoid enemy probes
- Fly over the town, beware of the rockets!
- Drive an armored Jeep to penetrate the enemy base!
- Walk with your gun in the enemy territory to destroy the nuclear core!!

How to play:
- Press space to land off
- Use arrows keys: left to reduce speed, up/down to move, right to increase speed
- Press X to fire, C to drop a bomb
- Destroy the fuel tanks or you'll run out of fuel!
- In the Jeep, press up + X to fire at the roof
- At walk, press up to jump, fire a bomb on the core to win

The game is hard, but it's by purpose! Enjoy!

Making of:
- This game was made in 15 hours with Love2D on a Mac Book Pro
- Every line of code (around 1000) is made from scratch
- My real work is to produce video games and teach video game programming ... Follow me on www.gamecodeur.fr
- I'm a big fan of retro gaming, so the game is inspired by retro games
- Sounds from SFXR, art made with PyxelEdit

Presumably, it needs the 32-bit version .DLLs of those libraries. I tried a few different versions, but I always get Application Error : "The application was unable to start correctly (0xc000007b). Click OK to close the application."

Shame, I like mashup games like this, the idea of having teensy-weensy versions of Scramble, Silkworm and Contra/MetalSlug on the same static screen sounds kinda cute.

In future, You might consider using .OGG instead of .MP3 for your audio, since libmpg123.dll is the only library in the list that is not open source. The other libraries can be freely distributed with your game. Also You might want to figure out a way to bind all game data, program and support libraries inside the executable, giving the player a simple way to run your program.

Have a nice day, and I wish You much success in Your programming classes! 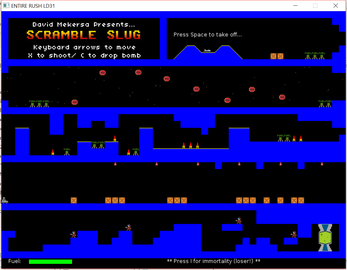